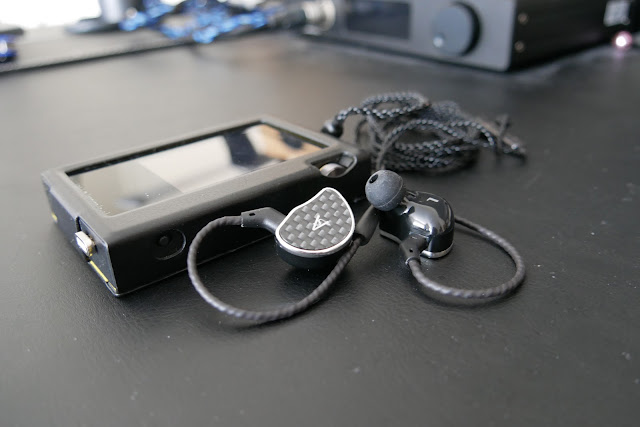 The Shozy x Advanced AcousticWerkes Hibiki Mk2 is the latest revision to their Hibiki line of IEM earphones. The original was released in 2017, while a newer Special Edition/Limited Edition came out more recently priced at almost double the original. This latest version, the Mk2, takes the driver changes from the Special Edition and puts it in the old housing with a little bit of updated treatment.

The plainweave carbon faceplate has a different signature on it. Replaced is the “Hibiki” model name with the updated “A-S” logo, signifying the joint venture between the two companies. The back side is now a shinier, smooth appearance versus the matte appearance of the original.

I never listened to the original or the special edition models so I am going into this without any prior bias.

Disclaimer: This item was provided to me by Lillian of LinSoul to review without bias. I was not paid to write this review and also don't make any money on advertisements or anything. This is just my unbiased opinion of these headphones after listening to them for a week every chance I had to listen to music. 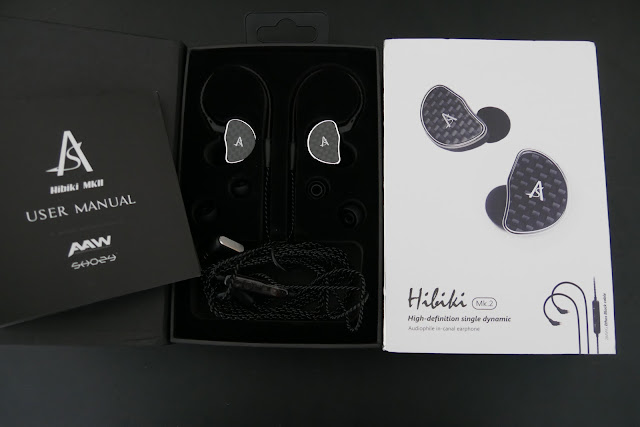 The packaging comes in a neat book-like box which opens up to show the IEMs, the cable, and 2 additional sets of silicone eartips. The smallest tips were pre-installed in my package.

The included cable is a detachable 0.78mm 2-pin cable that is well built. It has angled connectors and pre-hooked heat shrink wrapped ends. The heat shrink is tasteful as well as the black braided cable. On the right side, there’s a three-button microphone in a dark translucent housing. The buttons allow for volume up/down and play/pause. It reminds me a bit of the cable that comes with the Noble Audio IEMs.

I admit, I have not used the microphone and controls yet. I’ve been mostly using this headphone with my own set of 2.5mm balanced cables. 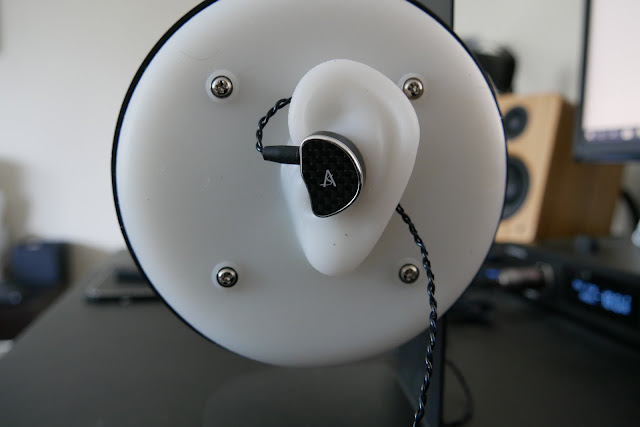 
The IEM itself features a 10mm “ultra-thin layer titanium diaphragm with neodymium magnet driver.” For being a relatively large driver and larger shell appearance, the IEM fits very well in my ears. The half-moon shaped plastic body is extremely lightweight and fits the contours of the ear opening quite well. The bore goes in medium depth or so and never feels tiring or heavy and I’ve had very little discomfort wearing these, something that is uncommon for me with IEMs.


The seal on these is pretty good. Isolation isn’t completely silent from the outside world, but it’s a big step up from the popular Tin Audio T2 which has medium (at best) isolation. These do not compete with Etymotics or the Campfire Comet or Massdrop Plus for isolation, but it’s a step behind them.


Just a heads up. I listen to many different genres of music – everything from rock to rap to country to jazz. I primarily listen to indie rock, post-rock, downtempo, folk, jazz, and bluegrass/country music. I love buzzing guitars and steel pedals. My favorite bands are Radiohead, Sigur Ros, The Beatles, and Explosions in the Sky. This review encompasses listening of many of these genres and bands.


I posted a frequency response chart of these above. They look fairly neutral overall in the chart; however, I would say these are bass-leaning-warm and mid-centric, which doesn’t really show up in the FR chart produced on my MiniDSP EARS.

The bass on this headphone has some weight to it. On some tracks, the bass can be very impactful and hovers on being muddy. I suspected this was due to output impedance and decided to use it with an iFi IEMatch with my Onkyo DP-S1 DAP and it seems the bass is tamed down a bit from the sometimes-uncontrolled nature exhibited without the attenuator.


Overall the bass is present and always lets you know that it is there. It has some occasional heft to it and can be loose at times though, but only occasionally sounding muddy or bloated as was heard when output impedance matching wasn’t optimized. The mid-to-upper bass is on the warmer-side of neutral and is generally pleasing and gives this area some weight without being exaggerated.

When moving up to the mids – these things have the potential to really shine. The mids are smooth and clear. Vocals really are accentuated and are the center of attention on most tracks. Both male and female vocals sound natural, detailed and accurate. Female vocals are sibilant-free and smooth. The upper-mids are a bit overbearing at times though especially at higher volumes and can be fatiguing to my ears.

The upper range is tame and clean though treble does seem to roll off quite a bit. This is also shown in the graph. Again, sibilance isn’t an issue here as mentioned earlier, and there’s never any fatigue due to the higher frequencies.

The other sound stuff:


As far as soundstage – the IEM places you front and center at an intimate concert. Like I said before, the vocals are the attraction here and they standout. The narrow stage makes every instrument seem a tad congested at times and also making all instrument depth seem like they are on the same plane.

But occasionally I’ll hear a part of a song where strings are trailing off the in the background and it blows my mind. So, it’s kind of a mixed bag, but overall, I feel like the biggest downside for this IEM is that instrument separation and depth is really tight and narrow – making everything seem very…. Loud.

Imaging and positioning aren’t an issue with these though, as long as there’s not too much going on in a particular song. At the Drive-In, for example, is pretty frantic and congested sounding, while listening to Chan Chan from Buena Vista Social Club is very engaging and detailed. Some of that is due to the song itself, but again, I don’t believe these handle frantic songs where many things are going on at the same time (loudly) very well.

Of course, this may just be a case of preference. I like headphones with medium to wider soundstage with good imaging and depth. Most headphones that are incredibly intimate don’t appeal to my senses but when listening to stripped down music, they do work wonders.

EQ does help bring down some of the annoyances I had. I reduced the 1Khz-3Khz region a few dB and increased the treble region up. Luckily, they seemed to respond pretty well to these modifications.

The Hibiki Mk2 does vocals wonderfully. They are smooth and the center of attention. The mid-forward sound signature really makes the vocals stand out and thankfully, they do it well enough that these would be great for users who love listening to music where voices are king.

On busy tracks, the smaller width can be overwhelming with instruments and voices blasting at equal volume – causing the music to shout at you. It’s the biggest flaw for this IEM in my opinion and something that doesn’t appeal to my personal tastes.

These things are also very comfortable and did not agitate me like many IEMs do. I didn’t get a chance to tip roll on these because I surprisingly found the stock tips very comfortable to wear.

As far as a recommendation – from my experience – this IEM does seem to get carried away in the mid-bass region when using devices with higher output impedance, which is unfortunately the case for both my desktop headphone amp and my DAP. Luckily, the use of the iFi IEMatch seems to somewhat rescue the IEM from the unevenness and muddy bloated mid-bass experienced without it.

This does seem like a unique IEM in this price range though, as it is mid-forward as opposed to many V-shaped headphones out there, however at the end of the day, I don't really like this headphone myself. It's missing openness, air, and is too mixed up in the mids for my true enjoyment.

Versus the Tin Audio T2

The differences in the upper-mids in their FR response really does appear on these IEMs when pitted against each other. The Tin Audio T2 is overall very balanced and neutral, with no single area standing above the other. The Hibiki Mk2, on the other hand, is again, warmer with more booming bass and forward vocals. The soundstage width of the T2 is wider than the Hibiki Mk2 and imaging is better. Vocals on the T2 are harsher though, with some rare cases of slight sibilance on female vocals whereas the Hibiki sounds much more natural and cleaner.

Versus the KZ ZS6


The ZS6 is V-shaped IEM but has very good clarity due to its emphasis in the treble range. Both IEMs can exhibit the occasional emphasis in bass though the ZS6’s bass slams more, however the Hibiki has a warmer sound overall as well as provide some greater texture. For width, these are polar opposites with KZ ZS6 being wide and the Hibiki being very narrow in comparison. The treble on the ZS6 was the dealbreaker for me as it was exaggerated too much that caused sibilance and heavy fatigue very quickly. The Hibiki’s treble is rolled off and extremely tame in comparison, with no signs of sibilance to be found and its overall warm sound signature is more pleasing to the ears. The added boost in the upper-mids in the Hibiki cause it to be fatiguing for a different reason though, but its by far the lesser of two evils.