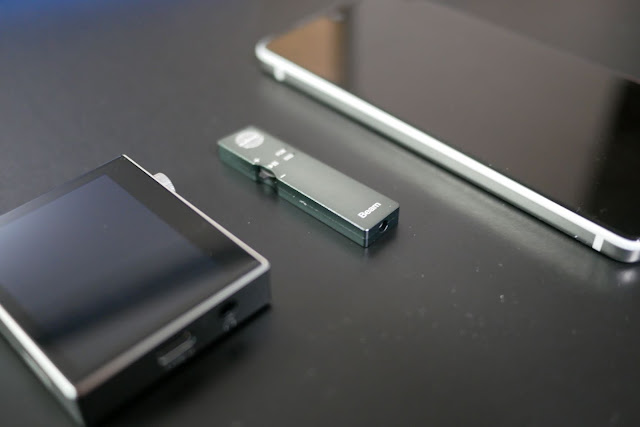 The Audirect Beam is a new USB-C DAC/Amp that works on computers and mobile devices like Android phones and tablets. This was provided to me for review purposes by Linsoul Tech. I actually was not expecting this item to arrive in my last shipment of stuff, but it came.

I thought it was quite interesting and finally have had time to try it out.

First off, let's get some specs out of the way.

The minature DAC features the ESS Sabre ES9118 DAC and claims to deliver up to 125dB signal-to-noise ratio and up to -114dB Total Harmonic Distortion. Pretty impressive numbers, and similar to what you'd see in ESS brochures. Finally, the output power is the real seller here, as it states it can provide up to 2VRms into 600Ohms.

I've owned a few of these type of devices in the past, but none of them have really stuck with me, despite the lost of the 3.5mm headphone jack on my primary phone devices. I've tried cheap stuff from Fiio like the K1 to the SMSL devices to the higher end Sabaj DA3.

All of these devices do their job as intended but have always had one big issue for me and that is the power. Yes, many of them have weak power but I'm talking more about power consumption. These do not have batteries in them, so powering them does drain your device. This isn't a big problem on a computer where it's already powered to an outlet, but using it on a mobile device can be a burden on the device's battery.

Since it uses USB-C, the mobile device can't charge at the same time, unless you carry around a mobile hub with you that has USB Power Passthrough (I actually do have a couple of these...).

So, none of them really fit the bill for me. But I'm still interested in hearing how this one works.

I've had a little more luck with the battery-powered ones like the Fiio Q1/Q1 Mk 2 and the ES100 Bluetooth/USB Amp. They work well and can power themselves, though not as easy to carry around as these tiny little "dongles." (I hate that term!) 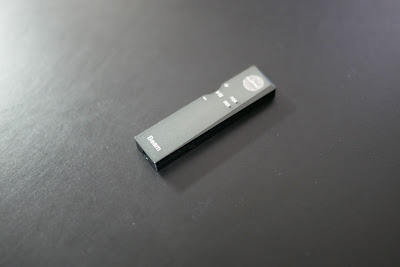 Build and Accessories:
The device is made out of lightweight aluminum and is quite small. It's about the same size as the SMSL and Sabaj units I've tried in the past and slimmer than the popular AudioQuest Dragonfly series.

The left side of the device features a very odd springy toggle that controls source volume and when pressed in, controls Play/Pause. This is a unique look, and I must say, I do not like it at all. It's very easy to trigger volume up and down and even more likely to accidentally pause music.

The device does come with a nice selection of OTG cables though. It includes a USB-A to USB-C, USB-C to USB-C, and a Lightning to USB-C cable for use with your computer, android, and iOS devices. The cables are well designed and attractive, more so than the ones that came with my FiiO Q1 Mk2.

I've tried this device with my computer as well as an Android device. I have not tried it on my iPad yet. Pairing it with these devices was as simple as plug and play. Both my Windows 10 laptop and my Android Pie phone was able to recognize and switch over to it immediately and I didn't miss a beat.

Volume on this device is plenty. There's a lot of spare headroom even on my Hifiman HE560 planar over-ear headphone. I originally plugged the Unique Melody ME1 IEM into it and was a bit shocked at how loud it sounded with my Windows volume down at 8.

I then tried plugging in the Campfire Orion, which I have on loan from Headphones.com. The Campfire IEM is notoriously sensitive to hiss and noise, and I am happy to report that the Audirect Beam does not have any noticeable noise at all with the Orion.

Finally, I gave it a good listen through some of my playlists. This IEM has a similar sound to what I find a lot of ESS Sabre DACs sound like -- very detailed, analytical and neutral/cold. The treble is accentuated on these and as mentioned, sound very clean and detailed. What I found missing right off the bat was the low end presence. It lacked bass.

I threw on a test track, Massive Attack's Unfinished Symphony, slapped on my HE560 and didn't feel overwhelmed with rumbling extension. The bass was very clean, but was missing the oomph I expect. Just to make myself assured, I unplugged the headphones and plugged it back into the Monolith THX-AAA amp on my desk and played the same track at a similar (normalized) volume and I could feel the energy of the opening bit of that track and some rumble around my ear pads. It's that sensation I was missing in the Beam.

So just to compare, I decided to plug the headphone into my laptop directly. Now, this isn't as crazy as you think. My MSI laptop actually features an ESS Sabre DAC/Amp system on-board, which was a selling point for me. It has a surprising amount of detail and power to drive most headphones well. With the HE560, again, I felt the low end rumble that was missing with the Beam. It wasn't quite the same as what I heard on a full blown THX-AAA amp with balanced connection, but it was in-between what I had heard on the Beam and desktop amp. My laptop wins. 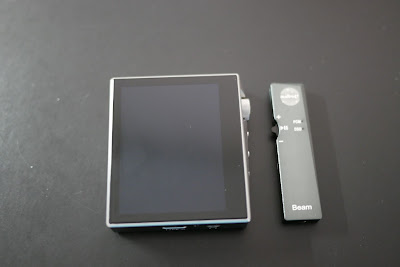 I unfortunately do not have my other portable dac/amps with me to test with as they are on loan with others, but from memory, I feel like the Beam excels in detail retrieval and clarity, while missing low end performance.

The whole set comes in at $99 and is actually a solid choice based on sound quality and package contents. I did not like the controls however, and that's a big thing for a device like this. The missing bass quantity (not quality), is also another strike.

So, in the end, I find that this is a perplexing one to review. It does a lot of things very well. It does a couple important things very average to mediocre. I'll just put it at that.