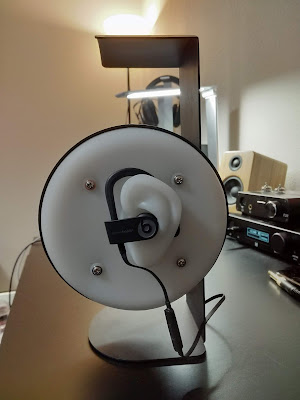 This is going to be a relatively short review if you can even call it that of the Beats Audio PowerBeats 3 bluetooth in-ear earphone marketed as a sports/gym wireless headphone.

The item was provided to me for FREE from the lovely fiancee of mine. She also received it for free as part of an Apple Store promotion.

Essentially, the Beats Audio product is in it's third generation now and is priced at about $200. The package comes with a small selection of tips, a charging USB cable and the headphones.

The headphone is made of all plastic construction with rubber silicone ear hooks that help keep them secure to your ears while doing physical activity. Overall, it's very lightweight and comfortable. I found putting them on a bit challenging because it's a weird design, but once on, it's not too bad for comfort.

On the left cable is a controller which houses a microphone and can also play/pause and control volume. On the left earphone is the button to turn on/off and pairing and on the bottom of the same earphone is the usb charging port.

It's bassy. It's V-shaped. It's really bassy. It's muddy. It's dirty and congested. It's really not my thing at all. Normally I'd spend a lot more time in writing this out, but I feel like it's a waste of my time. I will be flat out honest. And my measurements will kind of explain why:


The measurements below were performed using my usual MiniDSP EARS measurement rig. It comes with it's caveats, so read any of my previous info or read up on the device for more info. This specific case required a bit more work than normal though, and that's important to understand for these measurements. First off, this is a bluetooth device, so getting it a sine wave sweep to analyze isn't as simple as plugging it into my PC. I transmitted my sound through my normal desktop amp, and plugged in a Trond Bluetooth Transmitter. This transmitter was plugged into the amp's headphone jack and transmitted to the PowerBeats 3 through bluetooth (SBC format). There is some loss of quality, but it shouldn't be that significant for the purpose of this evaluation.

The following is the Frequency Response data, raw, as-is. One thing to note here, is the Left (blue) and Right (red) sides are fairly well matched, which is good! There is a small difference in the mids but that could just be due to measurement error or placement and seal in the rig. You'll see right off the bat that this IEM has a very V-shaped appearance. There is a big peak in the upper mids as well as a very large bass hump - which is characteristics of a Beats headphone, and most consumer off-the-shelf headphone in big box stores.

Next up, I compensated the curve, meaning I normalized  it to something that's easier to look at. This is a standard Diffuse Field compensation provided by MiniDSP. They normalized the measurements to the Etymotics ER4-series IEMs which many consider neutral. In that regard, a completely neutral sound would be ideally flat in this compensation.

As you can see, there is still a big bass hump, and some sharp peaks in the mids and even sharper peak in the treble region.

Two other fun charts to look at are the Waterfall CSD which looks at Decay rate. It doesn't look terrible for this IEM but I did cut it off at 125Hz which is right before the subbass region. Data after that is pretty much all over the place.

The other chart is the Total Harmonic Distortion, which also isn't too bad for this IEM.

Finally, I wanted to compare the PowerBeats 3 to a few recent earphones that are in the general price range and see how it differs. The three IEMs I am comparing here are the Campfire Audio Comet and Orion, as well as the Audio-Technica LS200iS. All three have much more similarities than the Beats. You can see there is a significant difference in how bassy and peaky the Beats are vs the others.

The chart is normalized to 300Hz.