Reviews of the Knowledge Zenith ZSN and AS06 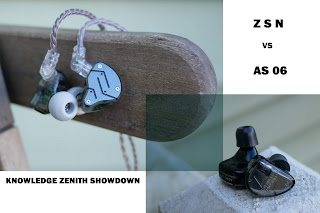 Normally, I review one headphone at a time, but since the holidays were a bit busy, my review queue started piling on. In the process, I accumulated two earphones from KZ and decided to do a review/comparison between these two new models from the ever-growing library of KZ products.

The first model is the ZSN, which can be found anywhere between $20 and $25. It’s a hybrid model with dynamic driver and a single balanced armature driver. The second model is the AS06, which features 3 balanced armatures (bass, mid and treble), and is positioned to be in the middle of the KZ lineup with a retail price at around $45.

Both of these products were provided as review samples by Linsoul. As usual, there are no other compensations and requirements besides to provide a review of the product online. As this comes up quite a bit about the legitimacy of these statements – I would like to add that I never send my reviews to the source to pre-review it prior to release, except on Headphone.com which is only to make sure it is properly formatted for the website template.

This type of freedom is nice, and allows me to express how I really feel about a product without any pre-disposition from the supplier of the item. In this case, Linsoul has been supportive of my reviews, and has pretty much been hands-off in the process except for requesting I post links to the products as part of my review – which are here: 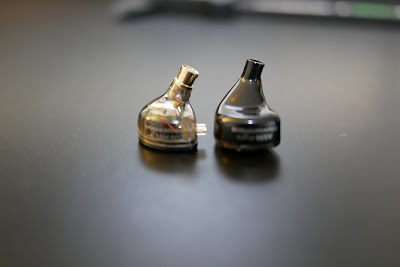 
Both products feature similar accessories and both have acrylic housing containing the drivers. The ZSN differs in that it has a metal faceplate which actually looks quite premium compared to the AS06. The AS06 shares the same housing as the AS10, which I found to be very mediocre and boring. The only difference is that it has an inner metallic plate with “6 Balanced Armatures” scribed on it. It’s sort of a lie, since there’s only 3 in each side.

The ZSN is also a little bit smaller and shaped to conform to my ears better. The AS06 has the same large size that makes it a little challenging to fit correctly in my ears without fear that it will pop out. When it does sit correctly, it does feel large and uncomfortable. In contrast to this, the ZSN is quite comfortable to wear for long time and is lighter weight.

Both feature braided cables with preformed hooks which is a nice change from the previous memory wire cables that KZ was known for. The cables are a bit sticky and can get tangled and messy pretty easily though, but I still find them very attractive and nice for the price range they are being offered at.

Finally, the standard KZ “starline” tips come included in the package and come in the standard Small, Medium and Large sizes. The AS06 also has a larger box and a metal badge that I really don’t know what the purpose is for.


In doing this contrast and compare review, I ended up having two KZ products that sound different from one another. They really share little in common to be frank. In general, I found the KZ ZSN to have a generally neutral-bright signature which I typically find best suited for my tastes. The KZ AS06 was a darker, and more laid back, warmer IEM which isn’t normally my thing. That said, I do like headphones that can fall into some of this category – mainly the HD58X and HD650 which are a bit warmer and laid back.

For my listening trials, I used a variety of different gear. The main device was the Pioneer XDP-300R Android-based portable audio player, but I also switched back and forth with the newly released Hidizs AP80 and Xudoo X3-II audio players. For desktop use, I did limited listening with these IEMs on the Monoprice Monolith THX-AAA DAC/Amp, Cavalli Liquid Spark, and a DIY Pete Millet Starving Student Tube Hybrid amp. For every use-case here, I used the single ended cable as opposed a balanced cable as I typically do. I did play both IEMs through balanced cables but only on a limited basis.

I spent a lot of time listening to Fleetwood Mac’s Rumours album while trying out both of these earphones. I also put them through the paces with various acoustic rock, indie, folk, dance, jazz and alternative rock music. 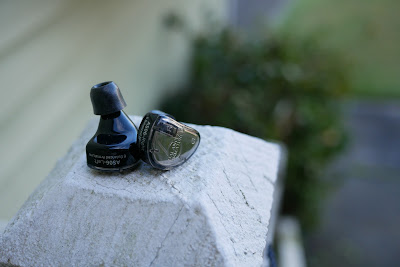 My very first impression when putting the AS06 on was WHOA! Bass! It was very dark and bassy with the stock tips. In fact, I got great seal, and it was so bassy, that it muddied up everything else. I swapped the tips out to Rebound foam tips and found that the bass levels were more controlled. Still, the bass dominated the overall sound signature and still bled over to the mids, which are quite recessed. Bass extends well but I don’t find the bass extremely detailed or layered correctly. In general, the elevated give the AS06 a warm, lush sound, but nothing exciting.

The mids barely exist on this IEM. They are really messy. I found the significant drop in the mids to really hurt this IEM. There’s about 10 dB drop off slope in the mids followed by a steeper drop in the upper mids, and then a spike up as you head into the treble region. This is classic V-shaped sound but not executed well. I’m wondering if the sharp second drop is due to poor cross-over between BAs.

Male vocals are the most troubling. I found both male and female voices to sound extremely compressed, with males being worse. Tonality is completely off and distant. Higher pitched string instruments can sound very forward and piercing occasionally due to the elevated treble peak.

An example? Let’s listen to “Dreams” by the aforementioned Fleetwood Mac. Stevie Nick’s haunting distressed voice just doesn’t come out with the emotion I expect to hear on a better IEM. Her voice seems distant and flat – compressed and missing energy. Instead the drum beat and cymbals dominate the mix. The focus of the music isn’t where I think it should be.

On a song like “Marbles” by The Knife, this IEM is a mixed bag. The deep bass notes sound great, and the “marbles” dropping is realistic, but the high screams from Karin and the high frequency cymbals do get a bit piercing at times.

I imagine this IEM will do better in house and dance music, though probably something more along the lines of deep house or bassier music. Anything with extreme highs (and many EDM tracks are, and are extremely distorted and compressed) may not do as well.

The AS06 does provide good imaging, and a wide sound stage which is engaging. Details can be a little scattered as mentioned previously, but overall, the BAs do a good job overall with these three areas. 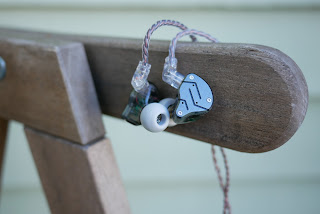 When I first put on the ZSN, I think my jaw dropped and I was giddy with smiles. This was because up until this point, every KZ IEM I’ve heard had exaggerated bass and treble which didn’t really match my personal preferences. While the KZ ZSN still has some peaky upper mids, as characteristic of every KZ IEM I’ve listened to, it does not boost the bass much at all, to my surprise.

The ZSN has clean unadulterated bass, which I really enjoy. It’s doesn’t bloat into the mids and has enough there to give the IEM a slightly warm signature. For the price point, the bass is good enough. It’s a little lacking in the details and texture, but in general, it does its job sufficiently.

The ZSN mids are recessed but nowhere near how they are in the rest of the manufacture’s product line. Instead, the ZSN has a slightly dry sound that compares to the how recessed the mids are in one of my favorite headphones – the Hifiman HE560. The mids in both are just south of neutral before peaking up in the upper mids. The ZSN, however, peaks up more. This gives them an exciting upper range energy that can sometimes be piercing in poorly recorded tracks or songs that emphasized the higher vocal registers.

A few other things before I do a comparison between the two: The treble on the ZSNs is a little uneven, but doesn’t roll-off significantly, which is a surprise at this price point. In terms of soundstage, I find that the ZSN to have a nice medium to wide stage, and imaging is good, especially at this price (repeat theme here).


Obviously, these two KZ products differ quite a bit. The ZSN is closer to neutral than any other KZ I’ve had a chance to listen to, and leans slightly bright. The AS06 is also closer to neutral than a lot of the other KZ products, but leans darker, while still retaining a general V-shape signature. It takes a much more laid back, euphoric approach.

The ZSN and AS06 both can run into sibilance and harsh periods, especially if mastering or bitrate is poor, due to steep slopes from the recessed mids to upper mids and treble. I found both to have some unevenness throughout the treble region, with the ZSN winning due to the cleaner transition between the mids and treble. The AS06, in comparison, sounds quite veiled and compressed through the mids – to the point of sound very low-fi.

The AS06, however, excels in the bass region. It has good low end extension, quality and quantity. If you are looking for something that can shake and bump and overall pleasantly warm, the AS06 does well for its $45 price. The ZSN just can’t match in this department, however, it provides a more audiophile neutral bass response that is cleaner and does not accidentally bleed over and mask vocals with heavy bass lines. 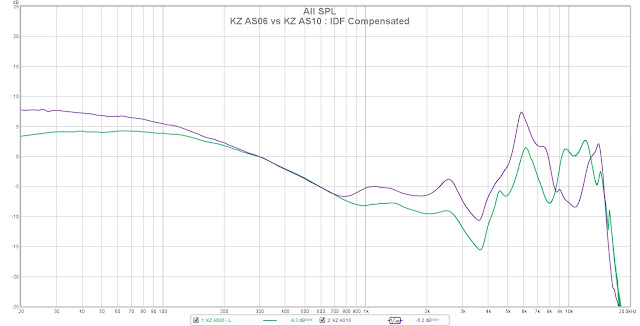 This is the real comparison. The AS10 sounds more detailed and airy compared to the AS06, and this is probably due to its extended and increased upper mids and treble. The AS06 sounds more veiled and compressed instead. I prefer the AS06 in the bass department though, as it does not bleed as much, and feels more controlled in general than the AS10.

The AS10 and AS06 share similar housing and therefore fit should be exactly the same. There’s an approximately $15 gap between the two models, and it’s a tough call. I personally would take the AS10 over the AS06, but in general, I wouldn’t buy either for myself personally. 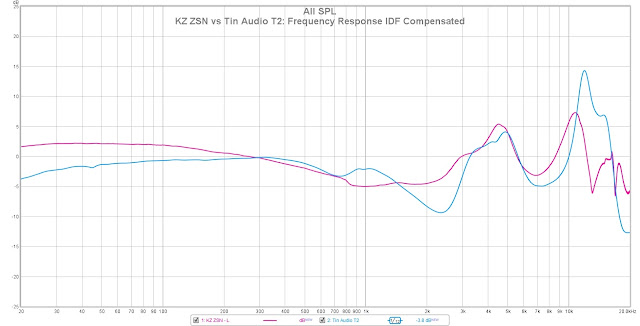 These two IEMs share a lot of commonalities. They are generally neutral sounding budget IEMs that have a sharp peak in the upper mids (3-5KHz) region that can be prone to sibilance and harshness. The general difference, however, is that the T2 does have better treble extension, but a much leaner bass response. The ZSN has a slightly warmer sound due to having about +3dB more bass response, which I think many will enjoy, myself included.

I had slotted the T2 as one of my favorite budget IEM kings, and the ZSN is going to surpass it as one of the best value to performance IEMs on the market. This isn’t something common for me to bestow on Knowledge Zenith, as I’ve never been a fan of any of their IEMs until now. The ZSN is a really good choice, and a great all arounder with small coherence issues and upper harshness that can occasionally rear its head. Those things are rather small for the $20 asking price though.