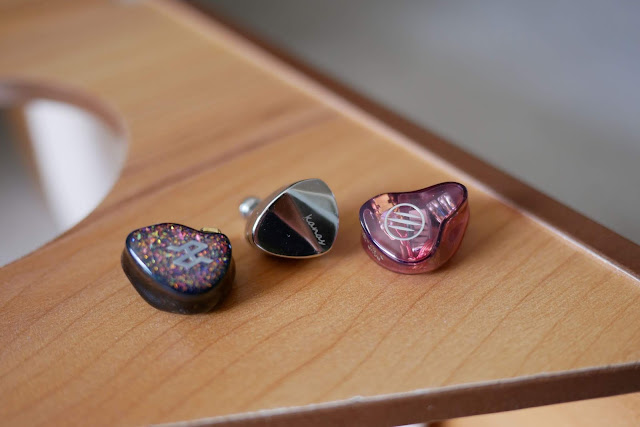 This review shoot-out will take a look at three IEMs I have been listening to lately that are all in the same price range: $179-199. They are new, but very hyped-up Chinese brands that have seen a lot of discussion in the headphone world lately.

The first IEM is the BGVP DM6, which has been in limited supply for months now due to their overwhelming amount of orders and inability to keep up with demand, since they are all individually hand-made. This headphone was provided to me by Linsoul for the purpose of review. You can find this headphone for $199 through Linsoul.com or LSR-Direct on Amazon.com.

The second IEM is the Tenhz T5, which was also provided by Linsoul for review. This headphone is also priced at $199, and is the successor the next step up in price from the P4 Pro I reviewed previously.

Finally, I will compare both to the Moondrop Kanas Pro, which I recently did a full review on and gave high marks to. As a reminder, this one was purchased by me and was not given to me for reviewing purposes.

All three of these IEMs come with premium braided cables and a selection of tips. The Moondrop Kanas Pro only came with 1 style of silicone tips in a variety of sizes, while the other two came with foam and different silicone tips and sizes. None of these came with a proper carrying case. The Tenhz package actually came as a surprise since the lower cost P4 Pro came with a very nice carrying case, so not seeing it in the more premium T5 model was a surprise.

The T5 and DM6 have nearly identical shells, with the DM6 just slightly larger. The Kanas Pro is quite a bit different with a smaller metal alloy shell. Of the three, I think the Kanas Pro and the T5 are most comfortable with the slightly larger DM6 trailing behind. All three are comfortable for long periods of time though, with the DM6 sealing off significantly better than the other two.

The T5 and DM6 both use MMCX connectors while the Kanas Pro uses 2-pin connection. This is really preference, but I prefer the 2-Pin connection more since they are easier to handle and more secure. They also don’t freely rotate after being inserted.

These three IEMs share some similarities in sound but primarily have distinct sound signatures. The most neutral of the three is the Kanas Pro, which strictly follows the Harman Target curve except with upper end emphasis. The T5 is a warm, rich and laid-back sounding IEM which does roll-off in treble significantly, while the DM6 is a U-shaped IEM with emphasis in bass and treble. 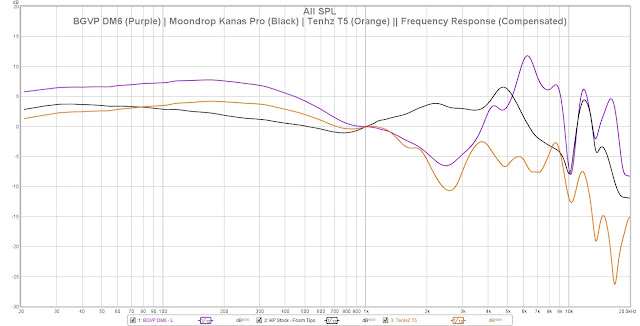 The bass response of the DM6 is the greatest, and surprisingly not muddy. It’s generally very clean however elevated. The T5 and Kanas Pro have similar bass responses in terms of punch and impact, but the T5 does have a richer and more filling sound compared to the Kanas Pro. The DM6 is easily the punchiest of the three and also extends well down more than the other two. I like the Kanas Pro signature the best as it’s just north of neutral for me and it’s easily the cleanest and most detailed of the three bass responses. The DM6 is the most fun though.

The mids is where these three start to divert even more. The DM6 mids are recessed compared to the rest of its sound profile. It’s not completely missing though, and is generally coherent. Some female vocals tend to be a little harsh as the sound response starts to elevate again in the upper mid region. The T5 has excellent male vocals with rich and full sounding low mids and coherency through out this region. The Kanas Pro is similarly very coherent, but with a more leaner sound. The T5 does start to sound a little compressed in the upper mids due to some drop off in this region and completely rolled off treble.

Like I mentioned, the T5 treble is rolled off and generally very tamed down. This keeps the signature very warm and laid-back and lacking clarity and distinct details. The Kanas Pro finds a good balance in the upper mids and treble hovering around neutral generally until the upper treble where it does spike up. Some people may be sensitive to it, however I am not one that is. The DM6, on the other hand, does have elevated treble and unevenness in this region which can be harsh on many tracks. It has a pretty large peak around 6-7KHz which can sound piercing in some songs. I never found music to be sibilant though, as it does drop off in the sibilance range. Generally, I found the DM6 to be a slightly harsh, especially on bad recordings or treble-focused songs. 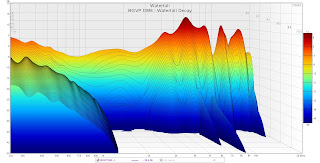 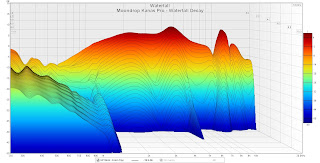 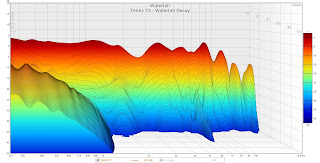 The Kanas Pro has already been heavily reviewed by me and was given high marks. When comparing it side-by-side in detail with these other similarly priced contenders, I find no reason not to continue to recommend it as a great all-around IEM for many listeners. It strikes a great balance in sound and should work across many genres, giving users a very clean, detailed, and balanced sound signature.

The Tenhz T5 is definitely on the warmer side, and it’s roll-off on treble even more defines its target. While it seems to be lacking detail and sparkle, it does provide a very comfortable listening experience that can easily be used for hours and hours at a time. The soundstage is also a bit forward and really accentuates vocals, particularly male vocals. I generally am not a fan of this type of sound signature, but I can see users of mid-tier Sennheiser over-ears and Audeze LCDs to like this sound profile.

The DM6 is the fun one of the group. I don’t believe this deserves as much hype as it has gotten, but it is a step up from the DMG and the Whizzer Kylin which are a tier below in cost with a V-Shaped sound signature. The DM6 does provide coherent mids, despite being recessed, but the treble is a little harsh and disjointed sometimes. There also seemed to be a little shoutiness going on in the upper mids, which led to music just sounding LOUD. I don’t know if I would recommend this IEM when compared to the other two, and especially with the highest price tag and longest wait time. It's still a good IEM, but I personally like the other two more. 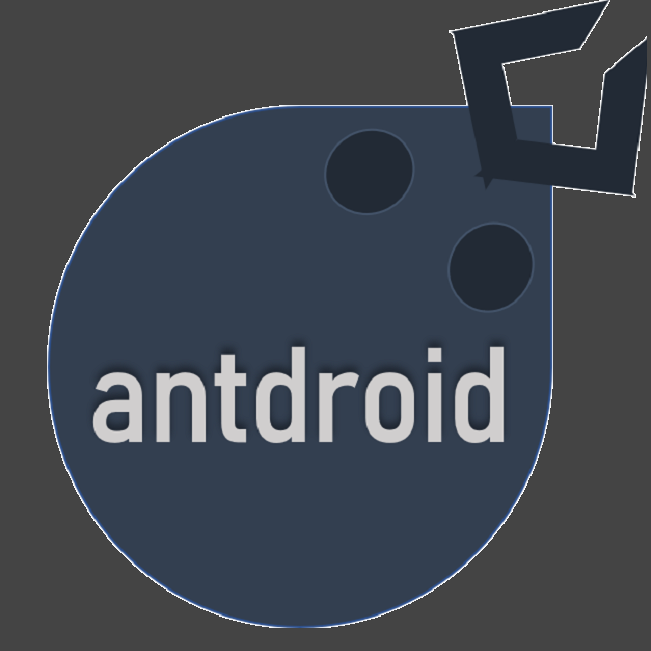