Skip to main content
Labels
Posted by Anthony Nguyen May 02, 2019

This short review will cover two of the latest In-Ear Monitors from Knowledge Zenith: The ZSN Pro and the ZS10 Pro. They both were released last month at around the same time and share so many similarities, I won’t bother making separate reviews.

The ZSN Pro is a dual driver – Single Balanced Armature and Single Dynamic Driver, while the ZS10 Pro is a five-driver setup with 4 Bas and 1 DD. Both are updated models from the previous ones released last year. I never had a chance to listen or review the ZS10, but I did really enjoy the ZSN as a budget pick with it’s neutral-ish sound signature that was only $20.

Well, first off, the shell design on both is slightly changed. They both feature faceplates on their respective shells that are quite similar. The ZS10 shell faceplate actually looks like the ZSN original but in a reflective chrome color, while the ZSN Pro’s chevron marks are lifted off the faceplate, as opposed to the cut-out look on the ZS10 Pro.

The accessories package is the same as before with the newer 2-pin cable and attachment style.

The major difference, of course, is the sound tuning. 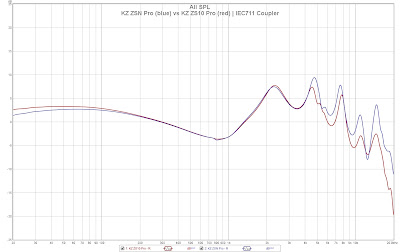 For me, these sound almost identical except one thing: the ZSN Pro is brighter and I don’t really recommend it. The ZS10, however, is tuned to have less treble and that makes it more listenable.

In general, both IEMs have similar bass and mid performance, and are improvements in that regard over the original ZSN. The bass is slightly elevated making the overall sound profile a tad warmer, and the mids are not as recessed as before. The upper-mids, which boosted on the ZSN original, has been tamed down, and the lower treble is more even on both IEMs. The ZSN Pro, again, has more treble in the middle to upper portions of the treble region, making them pretty bright.

If you’ve listened to the T2 Pro and the T2, the ZSN Pro is similar to that tuning, albeit slightly warmer. The ZS10 Pro is closer to the T3, but tamer in the upper-mids and treble. Detail retrieval on the T3 seemed better, from memory, but that could also be due to the boosted treble.

Again, this is just a quick review, as I do have large queue I am working through and I’d like to spend more time on other headphone reviews in the future. The ZS10 Pro is worth consideration. I would skip the ZSN Pro altogether, as I prefer the ZS10 Pro more and the ZSN more as well – along with a host of other budget IEMs like the Tin Audio T2, Final Audio E2000, and others.

I’d like to thank Lillian for Linsoul for providing the KZ ZS10 Pro for review. I personally purchased the disappointing ZSN Pro myself from their Amazon storefront at LSR-Direct. They are also located at http://www.Linsoul.com if you are interested in either of these two IEMs.