KZ AS16 and Tripowin TP10 Review

Review of the Knowledge Zenith AS16 and Tripowin TP10

The latest IEMs from Knowledge Zenith and KZ-Spinoff Tripowin are the AS16 and the TP10 models. These two models have a lot of similarities so I’ll be comparing them together in this comparision review. Both of these models were provided for review by Linsoul (http://www.Linsoul.com) and both items can be found on their website directly, or through Amazon.

The AS16 features 8 balanced armatures per shell with 2 designated for bass, 2 for mids, and 4 for treble. The TP10 reduces the count to 5 BAs with 1 bass, 2 mids and 2 treble. Both share the same shell design, which is very large, has a translucent inner shell, and a metallic faceplate. Within the shells are the  BA drivers as well as a white cover, which I assume is a dampener of some sort right below the nozzle. The layout is identical for both shells internally, sans the 2 additional drivers in the AS16.

The shell design is quite big, and is even larger than my Campfire Solaris. This makes the fit quite uncomfortable to wear for me for long periods of time. I never really found a tip combination I felt comfortable in with this design, and therefore had a frustrating time using these two.

Both share the same KZ-style cable, though the TP10 comes with a straight 3.5mm connector, while the AS16 comes with a right angle connector. Accessories are identical, as well as box packaging, and even the manual wording. 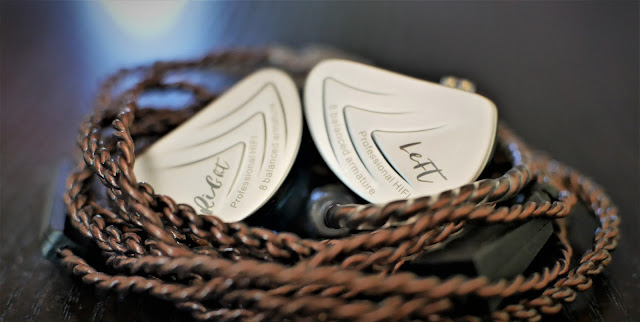 Both of these IEMs seem to be targeting a diffuse-field target, similar to how Etymotics approaches sound signature. The glaring differences in both of these is the lack of bass quantity, and overly extended treble, making them rather lean, bright, and pretty dull and boring sounding. 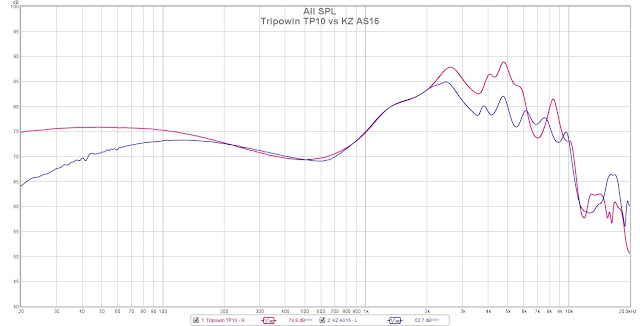 The TP10 actually has a more extended subbass and bass quantity in general, but also more elevated treble peaks. The KZ AS16, on the other hand, does have pretty glaringly missing bass response but a much smoother upper-mids and treble experience. The TP10’s bass is more weight and impactful than the AS16, but both fall well short of anything else I’ve tried, ever. They’re bass response is more reminiscent of classic ear bud designs.

The mids are recessed on both models, but I’d say a little less so than more KZ models. Both the mids and treble region are surprisingly detailed and clean. Imaging isn’t super great but soundstage is wide and open. They both present a very bright, airy sound signature, which is noticeably brighter and airy than the Etymotics Studio series. Even when compared to Tin Audio T2, or KZ ZSN’s or some other popular budget IEMs, these still seem quite bright. That said, I never found either of these to be sibilant, which is a bit of a surprise.

I found that these two do well for very specific genres, and I’d recommend staying clear from anything that needs a proper bassline, punch, impact, or anything with any semblance of bass required. That really kicks off the island anything EDM, most rock, pop, hip hop, rap, and a slew of other genres. It does do well for piano music, and some lighter jazz fares. It also isn’t bad for acoustic songs where bass and impactful drums are needed. You will still get a slightly brighter than normal presentation, but the lack of the low end is less effective here.

In the end, I find that neither of these are good all-around IEMS.

The AS16 is massively overpriced at $149, and you really are paying for marketing fluff and driver count. They do bring out a lot of detail and actually sound very clean, but at the asking price, I’d highly recommend at Etymotics ER2 or ER3 series, the Moondrop Kanas Pro, or a variety of other IEMs that do it better.

The Tripowin TP10 is priced more reasonable. It actually has better bass performance than the AS16 and in general, sounds similarly spacious and detailed, however it may have some occasional spikes of harshness. But at the $69 asking price, it can become a little more acceptable if you’re looking for a genre specific IEM or really like a bright diffuse tuning. But again, there are much better all-arounder options at this price point, starting with the Tin Audio T3 and the lower priced T2 and KZ ZS10 Pro.