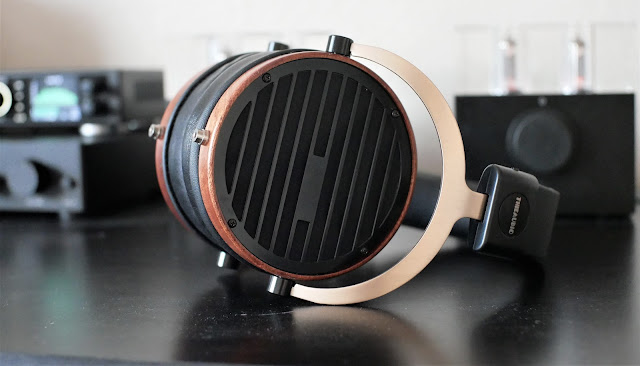 I have a special place in my heart for planar magnetic headphones and modding as I spent a lot of time, energy, and money into trying to tweak every aspect of the Fostex T50RP headphone for a couple years to learn how various changes affect sound presentation. After several headphones and many fun attempts, I decided to go away from them and just land myself with the Hifiman HE560 as my defacto planar magnetic headphone and it stood in my collection despite many times wanting to get rid of it. The HE560 has a nice balance of flat bass and mid-range followed by a slight drop in the mids and then a peak in the upper-mids giving it a little extra energy and giving it an overall slightly brighter than neutral tuning. I had been searching for a replacement to it but it’s combined low weight, comfort and sound was hard to beat at a price point I was willing to spend on.

Now comes the Thieaudio Phantom, a weird, cobbled together headphone from an unknown Chinese company using planar magnetic drivers, wood cups and a strange, yet comfortable headband and more things stuffed inside the cups than I totally quite understand. How do they stand up? I don’t really even know where to begin to be honest. This is a tale of two headphones. The one out of the box, and the one I dissected and put together as my own.

This headphone retails for $349 USD and can be purchased at Linsoul: https://www.linsoul.com/collections/headphones-iems/products/thieaudio-phantom

Out of the Box Experience

The version that was sent to me by Linsoul for this review came in a cardboard box, not the steel case that was shown in its first release. Within the box is a case that looks like a slightly smaller Slappa-style hard body case, 2 sets of cables, a variety of adapters, and for whatever reason 3 extra pads. Not a pair, but a pair and a half! The interesting thing is that the pads are all the same. All 5 are the exact same velour round pad. The original version of this headphone had shaggy pads, but they have since removed them from production units.

The wood cups are extremely lightweight and look great. The metal grill on the side aren’t the most attractive grills I’ve seen but they do the job. The one downside of the cups is that the clear coat on the wood does seem to easily scratch and peel off. The gimbles and headband don’t really look aesthetically appealing to me, especially with the large round hinge joint connecting the band to the cups, and I would rather they do something more modern and sleeker.

The included cables come with both a standard 3.5mm connection cable with cloth-covered wiring and a second set with balanced 2.5mm connector. The headphone ends feature 2.5mm mono connectors that go into each ear cup. One interesting quirk is that the balanced cable uses Sennheiser HD700 style connectors as opposed to the other cable which has a more normal look. The HD700 connector has a round end that is flattened to fit into the HD700 cup snugly. It looks a little odd on the Phantoms since they extend and are visible.

The Phantom has been an interesting and sort of puzzling experience in my time listening to it. When I first put them on my head and turned some music on, I wanted almost nothing to do with them. Out of the box, they sounded dark. Really dark. They were perhaps even darker than the Monoprice M565 I had tried a while back, and even darker than the LCD 2 series from Audeze.

Now mind you, I do prefer planars with a more Hifiman-like sound, which is closer to a neutral sound, and sometimes even considered bright. I also don’t mind the darker Audeze lineup, but these were in the area of sounding completely dead. The bass was rolled-off heavily, while the mid-range was relatively flat until the cliff that started around the upper mid-range and into the treble. Something was inherently wrong here, because I really can’t fathom why someone would tune it this way. But perhaps it’s also my personal interests too. And just to be fair, I did run measurements using MiniDSP EARS and the numbers matched my hearing. 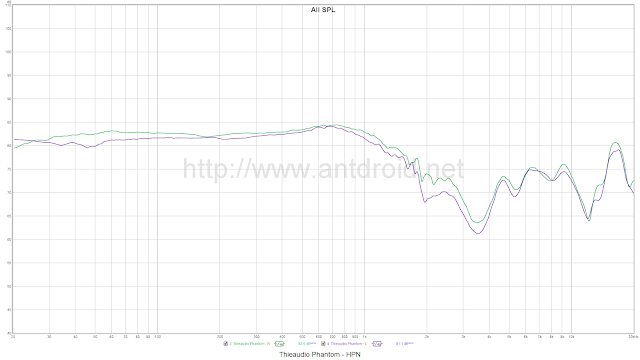 Note: These measurements were performed on MiniDSP EARS using the HPN Compensation

And so, the Phantoms needed to be opened up and examined.

Upon removing the pads, which were easily removed and replaceable with other similar sized pads, I was a little shocked to find that the rectangular driver was completely covered up by a thick layer of foam. The foam wasn’t even cut straight. It was cut with jagged edges and non-straight lines. Normally, most planar headphones only have the liner from the pads to cover the planar driver, and this foam really filtered out a lot of the treble response. 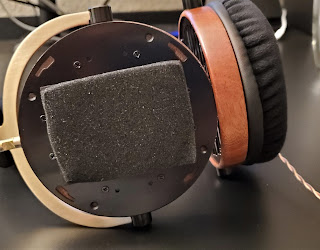 Removing it didn’t quite do the trick though. I ended up changing the default pads, which had a very large opening, and made of a velour material, with various pads I owned – everything from Brainwavz leather and microsuede pads, to ZMF Universe pads of all material types. I ended up going with Dekoni Elite Hybrid pads made for the Fostex TH900 series, which was the pad I use with the Hifiman HE560. This pad helped even out the bass response a little bit and lift some of the darkness out, but still, more work needed to be done.

I then focused on the opposite side of the driver – on the grill side. Removing the grill was as easy as unscrewing four fasteners and removing it from the wood cups. The grill has a very dense vinyl-feeling fabric on it that isn’t very porous. This seems to really hinder air flow and cause other issues. Removing this piece was pretty easy. It’s attached on by a double-sided adhesive, which was easily peeled off and put away to the side. 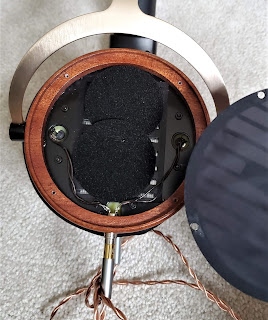 In addition to the fabric, above the driver itself, were two pieces of circular discs of foam. This foam was less dense than the foam used on the opposite driver, and didn’t even cover the entire surface of the driver – the driver is rectangular and these two pieces are circular. I ended up taking these out too.
So, with the removal of both items, I gave the Phantom another listen. Wow! The bass tightened up and extended down low. There was no more bass roll-off and now the subbass produced a nice rumble. The mid-range continued to sound flat until about 1K where it dipped again, but now not dark sounding, with the treble region beginning a rise. It started to sound more like an Audeze LCD series, if not a little thinner and brighter, however, still staying on the more laidback tuning side of things. 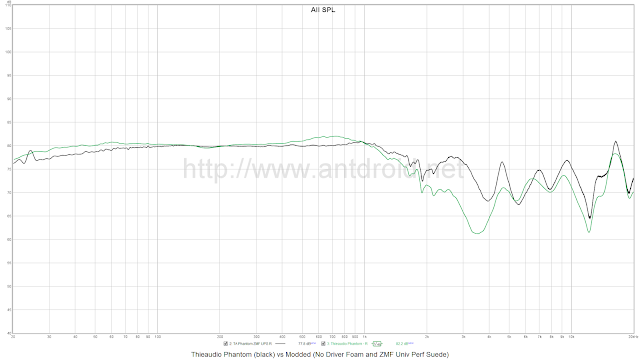 With these changes, I found the sound profile to really sound improved, with a thickened and better extended low end, and a more approachable and listenable upper end. There was still one problem, and this may be partially due to the metal grill or to the inherent nature of the driver, which supposedly is similar or the same as used in the Monolith M1060 series. There was audible ringing when I played songs that had a focus in the upper-mid range and lower treble, and when I played at a normal volume.

So, I’ve had to settle with placing the fabric material back on the grill. It’s reduced the ringing problems and hasn’t had a significant impact on the upper mid-range and treble drop.

And with that, I find the Phantoms to compare nicely to some other planar magnetics in this price point – stuff like the Hifiman HE560 and Sundara are on the brighter side of neutral but have similar low-end weight. Detail quality is generally similar as well.  The Mobius and Sine from Audeze also sound a little brighter than the Phantoms, from memory, however the Mobius does have somewhat of a similar tonality in general, as it does have a recessed upper-mid range as well.

In more recently released planars, I also have purchased the Monoprice Monolith M570, which is the company’s take on the Sendy Aiva. Like some of the other headphones I mentioned just above, the Aiva is also brighter than the Phantom, and actually perhaps brighter than all of the rest above as well, possibly comparable to the Audeze Sine in that regard.

The Phantoms have a bigger sound though, with a larger driver to help this. The low end is thicker, and the laid-back tuning of it being better for extended listening, where with the M570, the boosted treble gives a nice sense of air and sparkle, but with the possibility of fatigue over time.

As I mentioned above, the Thieaudio Phantom is a tale of two headphones. The default tuning is dark, and nowhere near how I would prefer to listen to music. It’s only after you open it up and do some quick and simple removal of extra materials stuffed into the headphone that the drivers themselves open up and let the headphone shine. Still, there’s some inherent issues with the headphone, but it’s somewhat easy to overlook at the price these are being offered at.

It does come into a bit of a cost-preference thing though, as for my liking, the tuning changes I did required buying pads that cost upwards of $50-70 and that pushes this headphone into costing the same or more than offerings from Hifiman, Audeze, and Monoprice, as well as the Blon B20 (which I have not listened to yet, but is also similar to the Sendy Aiva). At the “adjusted” modding price, some tuning preferences will need to be considered as well as other external things like whether one is comfortable re-tuning themselves, the aesthetic qualities, and wanting to go outside the box a little bit.