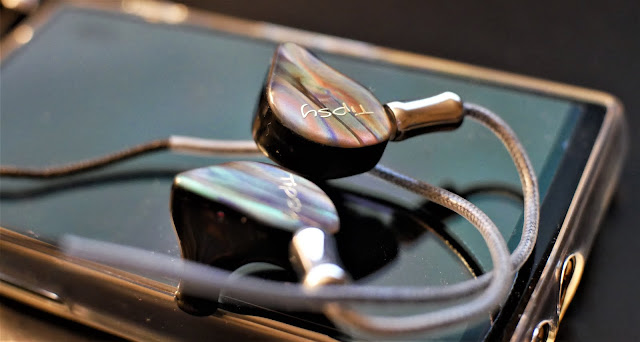 This is a quick review of the upcoming Tipsy Dunmer Pro in-ear monitor (IEM). The standard version of the Dunmer was released earlier this year, however I did not get a chance to listen to it so I won’t be doing any comparisons to the original one. Linsoul sent me this pre-release production unit for review and you’ll be able to find this unit on their website, http://www.linsoul.com in the future.

It is also available on Drop here: https://drop.com/buy/tipsy-dunmer-pro?utm_source=linkshare&referer=3XCGPL

The Tipsy Dunmer Pro is a hybrid IEM priced at $179 ($159 on Drop). The multi-colored IEM shell is lightweight and has some interesting designs to choose from. The shells house 3 drivers – a graphene-based dynamic driver and 2 balanced armature drivers.

The included cable is of the 2-pin connector variety, and uses a similar braid cloth material similar to the Shozy Form 1.1 I reviewed last month. In fact, I think this may well be the same cable but with different connectors and splitter. That’s a good thing, because I loved it on the Shozy and I find it to both look attractive and usable on the Dunmer Pro.

When I first put on the Tipsy Dunmer Pro, my first reaction was that they were bright! There was a boosted treble and not surprisingly an elevated 8KHz peak that many of the recent IEMs out of China have outfitted themselves with. This boost does push a little more clarity out to give users a, perhaps, false sense of resolution. I didn’t find the Dunmer Pro too fatiguing though, but it does comes close to crossing that line. The gain in that area wasn’t big enough to cause sibilance and any weird grain or audible artifacts in my normal testing tracks for this. That was a bit of a surprise, so it’s just tamed enough for me in that sense.

The bass region on this IEM is present, but is not it’s biggest attention seeker. It’s present, and has a mid-bass bump that gives the IEM a small amount of impact, but with the rolled-off subbass and relatively muted bass, it’s not over-powering. To me, that’s not a bad thing though, as I appreciate a tuning with controlled bass, but even despite that, I am left yearning for a little more down here.

The mid-range is rather uneven and not the strongest part of this IEM. It’s slightly recessed and sounds a little thin at times, but isn’t totally distasteful. It’s just not the area I end up focusing on when I hear this IEM. Male vocals and some of the lower frequency instruments sound a little thin, and, again, makes me want just a little more weight to it.

The focus is always shifted towards the treble, and, in some regards, the upper mid-range. It’s definitely an IEM that is tilted towards the female and more higher-pitched male vocals, strings, cymbals, and other instruments in this area. I think those who really enjoy that may find this in-ear appealing as it brings them to the front of the soundstage and accentuates a lot of the finer details in string plucks and cymbal shatters.

In some selected songs:

Walk the Moon’s Anna Sun – This is a straight-up pop rock song. Lead singer Nicholas Petricca’s vocals just seem distant and lost in this track. The drum roll has some impact, but I don’t ever feel any deep low end rumble, or any sense of bass really being present. The instrument seems lost even though I know it’s there. What is present though, is the crashes of the hi-hats as they feel like their in the center and front of the song.

The Tallest Man on Earth’s 1904 – This wonderful song from Sweden’s Kristian Matsson has some insane resemblance to Bob Dylan and other Americana folk contemporaries like him. It’s a stripped down song with just Matsson’s vocals carrying the song alongside his acoustic guitar, and an electric guitar carrying the chorus. In this particular song, the Dunmer Pro shines. It’s simple and doesn’t really push anything far enough back that it’s affecting the song. Matsson’s voice isn’t deep and low and so the way the Dunmer Pro is tuned doesn’t do anything to really make me miss anything about the track in general.

Santigold – The Keepers – This drum heavy electronic-fused pop song by Santi White is another song that sounds quite nice on the Tipsy Dunmer Pro. While the Dunmer Pro doesn’t have great extension or rumble, it does have a small mid-bass hump which fits well with this quick drum beat that continues to attack endlessly on this song. Santigold’s voice gets pushed to the front and doesn’t have any issues with sibilance or any strain. And so, while the song loses its rumble and deep low end, it does have plenty of impact to make the song enjoyable.

Johnny Cash’s Hurt – Johnny Cash’s deep voice seems very restrained with this IEM. While he sounds clear as day, his voice loses a little bit of its magic with the missing warmth. And while the guitars are exacting and clean, the bridge transitions are really missing something with the lower octaves of the piano.

At it's asking price, I find it a little bit of a stretch because I personally don't like how it's tuned. It's a little on the brighter side of things, and while I may have liked that myself a couple years back, I prefer a little warmer tuning now. The bass just seems rather tame and missing completely in some songs that need it, however it's got a mild to moderate impact due to a mid-bass hump.

The treble lift makes that region really stand out and creates tilts the balance to that end. So, for those who do enjoy a brighter tuning, this may be one to look at. I don't know if I'd recommend it at the price, but the cable is quite nice and the overall fit and looks are appealing, but still may not make up for some unbalanced tuning.