Comparison of the iBasso DX160 and the Hiby R5 Music Players 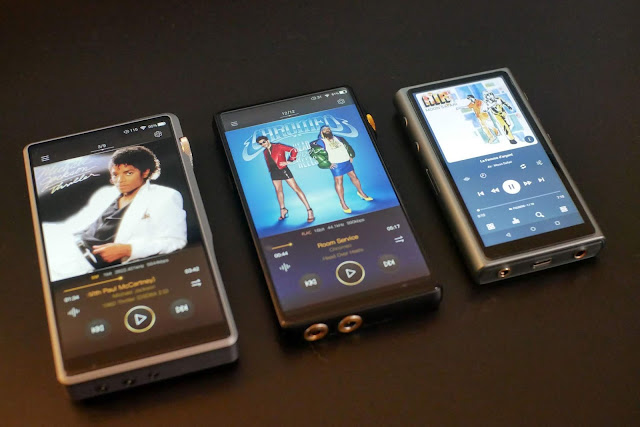 Comparison of the iBasso DX160 and the Hiby R5 Music Players

It seems like on a daily that I’ve been asked to compare these two Digital Audio Players, the $399 iBasso DX160 and the similarly priced Hiby R5, on the various internet audio communities. I happen to own both of them and have reviewed them individually, however I didn’t go to great lengths comparing the two in my previous review of the iBasso DX160 on headphones.com.
In this article, I’ll go over my subjective opinions and some objective facts about both players.

Let’s go over their similarities first.

The Hiby R5 is a compact, easy to handle and very well-built player. It has great curves in the right places and the candy-bar style look reminds me of Sony’s line of DAPs. The buttons are large and easily pressed, but more importantly, are not easily depressed in pockets or with cases on. This is important as I find this to be an issue with the other player in this article.

In terms of software, the Hiby R5 is incredibly fast, as it uses the Qualcomm Snapdragon 425 SOC which is actually used on many budget/mid-tier phones. While it’s considered slow for phones, it performs outstandingly fast as just a music player with minimal multi-tasking and not having to handle phone priorities.

Along the way, Hiby a software-first company, also added System-wide Equalizer and filtering via their MSEB equalization software. This is pretty great because no other DAP that I am aware of has system-wide EQ that’s android based or has support for third party apps. Most of them only have EQ that works on the default music player and other apps are left to their own devices.
The R5 is targeted at delivering a very smooth mid-focused sound that would really appeal to lovers of a relaxing, laid back listen, similar to how I enjoy warm tubes and listening for an extended period of time. This is a good or bad thing of course….

…because with this, the resolution isn’t very good, at least when compared to the DX160 and comparably priced Fiio M11. The R5 is only slightly better in sound quality than the average smartphone. That’s a little unfortunate because everything else about it is great. It just doesn’t have great treble extension and seems to roll-off rather soon. This goes along with the previous statement where I find it warm, lush and mid-focused.

The R5 definitely has a smaller soundstage width and sounds more intimate in that regard, while still retaining a very smooth sound. For me, I would prefer something a little more open and airier.

The DX160 has a larger, brighter and more vibrant looking screen. On top of that, the volume wheel is attractive, albeit, its not the best volume wheel out there. In fact, I think its really a poor use of the wheel and may have been better just using buttons – I love my volume wheels as its done very well with my previous DAPs, but this one doesn’t cut it for me.

Oops, that was a What I Don’t Like About It spoiler. Oh well – What else do I actually like? Well the DX160’s bigger screen makes it easier to type and view things than on the R5. That’s a nice advantage actually. I also enjoy the fact that the USB-C is on a different side than the headphone connectors, however I wish they were flipped, as the USB-C is on top and not on bottom. Either way though, this allows me to use a USB-C docking stand to charge my player while I use it, which I can’t do on my Hiby R5 since they ports are all on one side.

As far as sound quality goes, the DX160 is markedly better than the R5 in terms of shear resolution, treble extension, separation, soundstage width, and dynamics. There’s a noticeable difference going from one to the other and I’ve done a lot of A-Bing between the two and trying to adjust the R5 to improve some of it without luck.

To me, the R5 will present music at its basics and then continue onward. With the DX160, I get the basics but I also get just a little bit more. Strings have more twang to them. Cymbals have more resonance. It’s the little nuances that are just more apparently there that seem to go away quicker on the R5 – its like the difference between a ultra clean solid state amp and a highly distorted tube amp, where the R5 has more softened edges and a little more smearing to give you a more smooth sound, while the DX160 delivers with more intricate detail without as much signal loss.

There’s some issues with the DX160 – this is mainly very mediocre battery life and a UI that can be slow and laggy compared to other competing DAPs. This isn’t your best friend when  you are trying to multi-task – say downloading tracks from Spotify, Qobuz or Tidal while trying to play music and doing other things – it may or will grind to a halt.

The BT and Wifi reception isn’t the best – in fact Bluetooth range is pretty poor and limited to just about 10-15 feet for me at best. That’s not a problem for me in most all use-cases, which is mainly using it on a plane or walking around where I still have the player near or on me.

While there’s not a whole lot you can do with the 2nd option, and for me its not really a big deal either, the first one comes down to very poor management of resources or picking the wrong governor settings in the Android kernel. This is something that I think Hiby has done a lot better job of, but luckily there are some hacks you can do to improve performance tenfold.  I posted an article to that recently on my blog.

People have also complained about issues with noise when using wifi on some batches of the DX160. I, myself, have not experienced this issue but people I know have. This seems to be a small but still substantial bug with some of these devices and should be aware of.

I hope this little comparison helps some. I have both still – I prefer the iBasso DX160 with some modifications to the system to get it running how I want from a performance standpoint. The battery life is still not great but I can live with that since I am usually near a way to charge it or play it while connected. The bigger screen is also a big plus for me besides the great sound quality, especially at this price.
That said, I still have fondness of the Hiby R5. It’s a cute compact player that feels wonderful and has software that is fast and good battery life for an Android device. It’s unfortunate that I find the sound quality isn’t on par with the DX160 – and funny thing though, I used the Apple USB-C to 3.5mm adapter with the R5 today, and actually found this to be a really nice combo, and the dongle isn’t software limited by the R5 for whatever reason like it is on other Android devices.

Anyway, there you have it. Let me know if you any questions!

I did a study to compare battery life of the two in real-world application:

I let DX160 play with qdc uranus an album on repeat, flac, using poweramp, all day long. it last 9 hours almost exactly from 100% to 0%

I then let Hiby R5 do the same thing, it last 11.5 - 12 hours (i wasn't home when it died, but im guessing based on android estimate when i left)

Both were using 4.4mm balanced connection and playing at approximately my normal listening volume (70dB SPL)

Screen on-time was approximately 1 hour each. I've noticed screen on really drains the DX160 battery, since it's screen is large and overly bright.