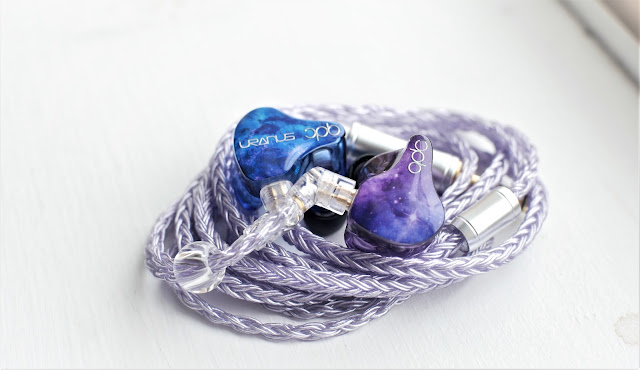 The Uranus is the newest universal IEM from Chinese-makers, qdc. This hybrid earphone retails at $219 and features a dynamic driver and a balanced armature driver. At the time of writing this, this model was only available at HifiGo.com and that’s where I purchased this unit for myself.

The qdc Uranus features a purple and dark blue translucent shell design with a space galaxy themed opaque faceplate in matching colors. The qdc logo and model are branded on each shell in a chrome-finish, and I find the look really stunning and elegant at the same time. The shell uses a custom-like housing design that fits extremely comfortably in my ears. It’s just a smidgen smaller than the qdc Anole VX that I currently also own, which I found also comfortable.

The package also contains a set of cables, various tips, and a really nice leather qdc carrying box (similar to a jewelry box) that can store everything within it. I find that this is a really nice bundle, and that the case is actually more attractive and usable than the one that came with the qdc Anole VX which is ten times the cost.

For this review, I swapped out the default cable and am using a light purple-colored Kinboofi 4.4mm balanced cable and used it primarily with the iBasso DX160 digital audio player, and the Topping DX3 Pro dac/amp. The purple cable goes quite well as a matching outfit with the purple and blue shells of the IEM. 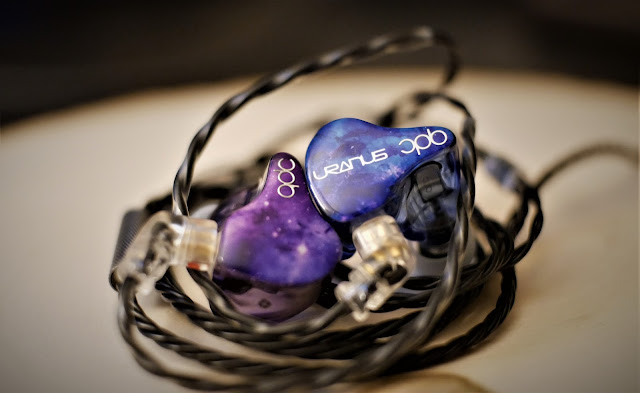 When I first put the qdc Uranus on, I was a little lukewarm on it. It has a warm, laid-back, heavy U/gentle-V shaped sound signature that, when I first listened to it, sounded very low resolution and a little bloated. Whether it was some mechanical burn-in, brain-burn-in, or just music selection, I find the Uranus to soften up a little bit and it sounds a bit better than my first couple hours using it.

The bass section of the IEM is controlled primarily by the dynamic driver. I have not heard the previous qdc Fusion but there were complaints of the dynamic driver sounding weak, and missing decay and slam. I, myself, judge bass by resolution, texture, and speed. I like bass to be a little faster, and heavier notes and decay isn’t something I tend to care as much about – it’s probably why I really like planar magnetics, ribbon drivers, etc. or even the Campfire Solaris.

With the Uranus, I find the bass to be a little scattered. In some songs, primarily electronic dance music that is heavier in this region, I find the bass driver to be somewhat bloated. Decay isn’t necessarily the issue, as I think it decays rather naturally, and more so than a traditional BA driver does. It’s just that on some songs, like for example, Daft Punk’s “Lose Yourself to Dance”, the heavy weighted kick drum bass hits sound a little blunted, while also being a little overwhelming, especially in the busier parts of the song.

In an even busier song, like “Contact”, the dynamics sound just a little flatter than what I’d like, however, it does handle this song alright in general – there is not a sense of congested play, and the dynamic driver actually sounds alright.

The mid-range has a lot of body, thanks to the elevated lower mid-range. The dynamic driver does shine in this area in my opinion. A couple good examples is the electronic-ballad, “Sunday Night 1987” and also “Atlantique Sud” by M83. In both of these tracks, the electronic soundscape backdrop is warm, rich, and inviting. Notes decay with natural tendencies and feels lush to my ears.

In Canadian country singer Orville Peck’s “Winds Change”, the qdc Uranus’ elevated lower mid-range adds a lot of grit and heft to his deeper voice. The bass notes have good impact as do drums and the like. The steel pedal sounds a little forward in this track, almost at the same distance as his voice which can be a little distracting, however as a fan of the steel pedal, I kind of enjoy this. If it were any other instrument, this could be a bit annoying. 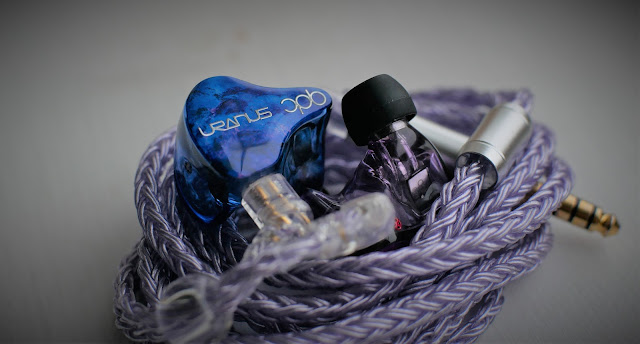 In sticking with Canadians, I’ll use Sarah McLachlan as an example of how the qdc Uranus’ upper midrange has an early and sharp rise starting at 800Hz, similar to how they’ve tuned many of their IEMs including the VX that I own. Sarah McLachlan’s voice is front and center in her hit song, “Adia”. Her voice comes across with gentle beauty and is forward, while the piano notes follow just behind her. In “Angel” where she extends her vocal range up a notch, I don’t hear any signs of harshness in this region nor in the treble areas.

As stated before, I find the Uranus a little laid back in the sense that it’s treble does roll-off early and lacks a lot of air and extension. This, along with a more elevated, thicker low end, makes the overall sound signature very laid back and well-designed for non-fatiguing listen.

To test this further, I tried to put on some of my harsh high treble vocal tracks to see if I had any problems with sibilance. These include various songs from Alvvays, Chvrches, Rihanna, and Cocteau Twins, and they all pass these tests without any sibilance issues. There’s still a rise in the sibilance and brilliance region that can be audibly heard. Guitar strings and cymbals can be a little forward, as there’s a rise between 6-8KHz that give the general sound here a little bit of brightness, but I never found it to be harsh or over my limits either. Some IEMs I’ve reviewed or had a chance to listen recently, mainly chi-fi, but also western brand’s v-shaped IEMs, can be a bit too much in this area for my ears on many pop tracks.

In terms of just general soundstage and imaging, I think the qdc Uranus is average, at-best. It’s got a more forward presentation and can be intimate and not wide-open sounding, especially without any treble extension to provide upper end air. Imaging is generally good for this price point in tracks that are not super busy. When I throw on some Tool, I get some mixed results. In a super busy track like “Jambi”, it’s a little hard to distinguish instruments at times, but on the opening parts of “The Pot”, I have can hear the various instruments flowing around me in a narrow 3D space but with appropriate height – It’s not as holographic as say the Campfire Solaris or the qdc VX, but it provides a sense of height better than other IEMs in this price range that I have used.


For a fair assessment of the qdc Uranus, I wanted to compare it to at least another one of my IEMs. Currently at my fingertips is the Moondrop KXXS, which I’ve kept around as a good baseline IEM for this type of price range. When listening to both KXXS and Uranus side-by-side, there are some pretty obvious differences.

The KXXS has a much wider soundstage with more clarity and upper end air. The Uranus sounds more forward, thick, warm, and in some ways, with a more low-end “low-resolution”. I wouldn’t say the entire sound signature is lower resolution – the upper mid-range and treble sound pretty clean and resolving, but I just don’t think the tuning of the dynamic driver and the low end is very good, and it becomes even more evident when you take them off and hear them against something like the KXXS or the VX even. It’s just a little too warm with a weird drop off in the midrange at around 800Hz that makes some items a little too far forward and closed in and some instruments just a bit missing. Switching between the KXXS and the Uranus repeatedly and this becomes clear.

Which brings me to how I want to conclude this review: The qdc Uranus is an IEM that I originally disliked – not hated, but was underwhelmed. I thought it was too bassy and a little muddy. Over time, I started to enjoy it’s very warm, intoxicating laid-back signature that made it really easy to listen to for hours at work at a time, and when you’re not critically listening to it, you forget about its weaknesses – it still has some issues on the lower end that doesn’t please me with a kind of interesting bass and lower mid-range response that can be a problem for those who really want to use these as a critical listening tool.

But, if you just want something to put in your ear and tune out for a bit, these do work out really well for me. I don’t know if I fully recommend them at it’s asking price, but I do really enjoy the aesthetics, the wonderful fit, and the overall accessories package – it’s just missing the top notch sound that even seems a little underwhelming at it’s asking price compared to other recent favorites. 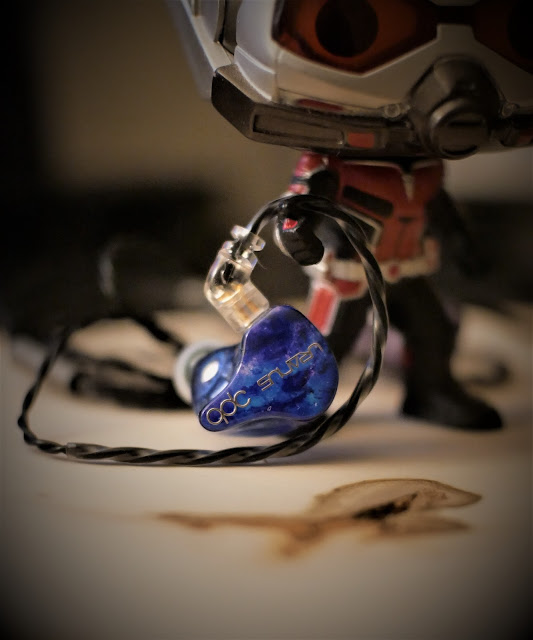 Edit:
After seeing this review, HifiGo offered to give me a $10 coupon code to share for anyone interested in this IEM at their store. The coupon code is ANTDROID10

I wish I had this when I bought it :)