A few months ago, I reviewed the Shozy Form 1.1 to some mostly favorable results. At $59 to $79, I found the dual-driver hybrid to have pretty solid resolution and fast, fun impactful bass for it’s asking price. My biggest gripe with it was that I had to use EQ to drop the treble response down to make it not so fatiguing and harsh, as I found listening to it was a challenge to it’s peaky upper-end.

The $199 Shozy Form 1.4 is the latest release to this series, and was sent to me by Linsoul for a review. I’ve had it for a little over a month now and have found it to be a nice update to the original 1.1. The 1.4 is also a hybrid featuring the same beryllium dynamic driver, but adds 3 additional balanced armature (BA) drivers to give it a total of 4 BAs within the same sized housing.

The housing now features a wood design faceplate, which is supposedly real wood, laminated within the acrylic shell. The cable is the exact same cloth-braided cord used in the Form 1.1, which I found to be very nicely made, and easy to use before. 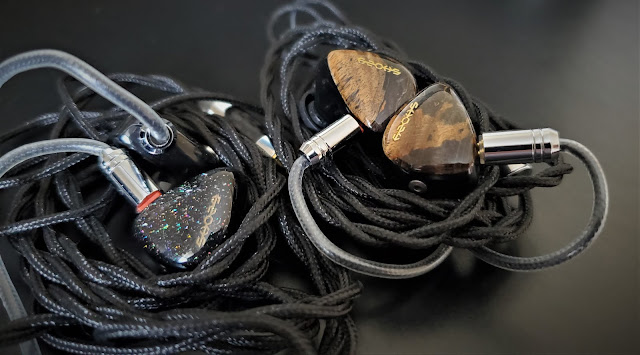 The Shozy Form 1.4 has a nice balanced sound signature, though it does have a mid-bass hump that punches a lot of weight at times and lacks extension in the upper treble, however I don’t find that to be a problem, at all.

The bass level and quality hasn’t changed at all since the Form 1.1, as it’s being carried out primarily by the dynamic driver. There’s a lot of punch and slam at times, however the decay speed is on the faster end of a dynamic driver. I typically don’t like mid-bass humps but this one does it tastefully, as there’s not a lot of mid-range bleed off.

The mid-range has also pretty much stayed par for the course despite having more drivers. In fact, I found the entire headphone to sound almost identical to its lower cost predecessor with the only tweaks happening in the treble range.

With the original Form 1.1, I found that there was too great of energy around 8K and onward, which caused a lot of records, not just bad ones, to sound overly strained, harsh, and even sibilant. I felt it ruined it’s tonality with the exaggerated high end. With some EQ work, I was able to tone it down without any problems and then found the Form 1.1 to be a rather competent IEM. On this newer model, they must have taken some of that feedback to heart, as the new sound signature has a much more tamed upper frequency range, which makes everything sound more natural and relaxed.

There is a roll off right after 8K but in practice, like the Dunu DK3001 Pro I just recently reviewed, I didn’t find this to harm it’s tuning at all. With this small treble update, I found the Shozy Form 1.4 to sound pretty solid right out of the box.

Like the Form 1.1, the soundstage here is just average width and lacking a lot of depth, something I am slight disappointed at with a much higher price tag at $199. There aren’t a lot of technicality differences between the two despite having more drivers that share the load, and I haven’t been able to audibly hear enough to distinguish better resolution, transients, or anything of that nature.

At the end of the day, I think the tuning of the Form 1.4 is an improvement over the Form 1.1 It fixes the issues I had with treble gain, and strained, and sibilant sound, however I am not totally sure the small fix, which can be patched with EQ, is worth a 2.5X price gap. Yes, there’s more drivers now, but I don’t know if they do enough for me to really hear a marked improvement. That said, I rather grab the Form 1.4 over the Form 1.1 any day, however I also didn’t pay for these review units. The choice is going to be up to the user here.

And while I do like the Form 1.4’s general sound signature, I would take any of the lower cost Moondrop offerings – Kanas Pro and KXXS/Starfield – over the Form 1.4 as they just present sound better overall.