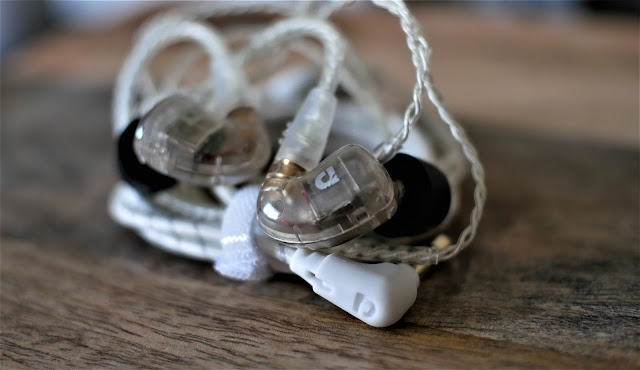 Audiofly is an Australian company who make in-ear monitors marketed at “musicians and music lovers alike.” The company has a series of IEMs starting at approximately $129 AUD (approximately $85 USD) to the most expensive set in their collection, the AF1120 MK2, at $849 AUD (approximately $500 USD at the time of this writing amidst the COVID-19 pandemic – it was $699 USD when released).

The company recently allowed me to review the AF1120 MK2 IEM and sent it over to me on loan for this review. I will be returning this review sample back.

The AF1120 MK2 has 6 balanced armature drivers per side with a 3-way cross-over system. Each of the drivers are a dual arrangement with 1 pair for low, 1 pair for mid-range and the final pair for the upper frequencies. The IEM has a low impedance of 11 ohm and sensitivity of 109 dB at 1kHz.

The transparent shell design reminds me of a Shure-style IEM with a super lightweight plastic material, in a very small droplet-like casing. The housing isn’t as round though, as it has a more corn kernel like shape with a squared off front. The connectors are MMCX and they come with Comply foams pre-installed which I found to be an extremely comfortable combination with this earphone.

The cable is an interesting combination of braided silver wiring with memory hooks from the IEM connector to the Y-Split. From there, the cable is reinforced with a braid cloth material similar to Paracord, which Audiofly calls “Audioflex” which is made of CORDOURA fibre technology. The cable is a little peculiar looking but actually handles really well and doesn’t tangle easily.

The package also comes with a selection of tips, source adapters, and a protective hard case. 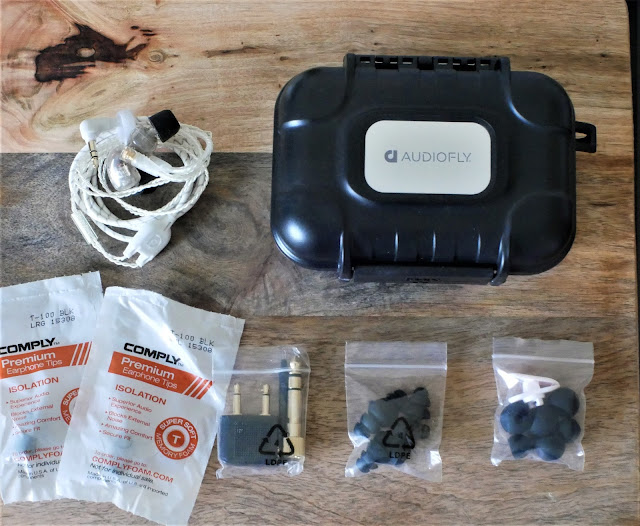 The AF1120 Mk2 has a very laid-back tuning, with a warm low-end and gentle mid-range with an interesting treble range which has some interesting dips and peaks which create a mix of a smooth yet occasionally harsh spiked sound. I’ll get to this in a second.

The resolution of the IEM is actually pretty good, especially at this price range. I found that instrument separation was present and never felt too congested, at least at lower volumes. Depending on the music, though, listening to this at higher volumes did bring out some incoherencies that fell around the lower mid-range that made male vocals sound hazy and sometimes very forward sound.

Bass is presented with a little bit of emphasis, although it’s not boomy nor heavy. Instead, I find it actually nice and warm, with a richer low end, that is pleasing. There is more emphasis on mid-bass than sub-bass with a slight roll-off down in the lowest frequencies.

The mid-range has nice body to it, while remaining clean and succinct throughout the range. The lower-end of the mid-range is a bit more elevated than the rest, particularly emphasizing male vocals with a deeper tone, however, the upper-mid range is gentle and soft, and allows many female vocals to sound pleasing without any harsh tones. Like I mentioned a couple paragraphs back, I found that male vocals sounded a little bit off – in fact, I think the midrange, in certain areas, falls back, presenting some songs with a hazy like sound, that isn’t too problematic, but does ruin some music for me.

For example, it is noticeable in some songs by The Civil Wars, specifically “C’est La Mort.” I am used to hearing John Paul White and Joy William’s vocals to be forward, clean, exacting and full of detail. Instead, with the AF1120 MK2, I find them slightly veiled, with a disjointed presentation that sounds like there’s something obstructing their voices from shining. It makes the song sound like I am listening to a low fidelity version of it that what I’ve grown accustom to on other IEMs, which have more even mid-range and a slightly larger upper mid-range gain.

Moving to the treble region, the AF1120 MK2’s lower treble takes a massive dip in the frequency response, followed by a sharp peak around 7.5 KHz which can make certain instruments like cymbals and sibilant sounds shriek occasionally.  There’s not a lot of treble extension past 7.5K, which is fine for the intimate signature that this IEM portrays, but some may find it lacks some air.

I found the treble inconsistencies occurring in songs from Chrvches especially, with Lauren Mayberry’s voice sometimes going a little astray. I think part of the problem is due to such a relaxing overall tonality and signature, but with a large spike that throws off the coherency from time to time. 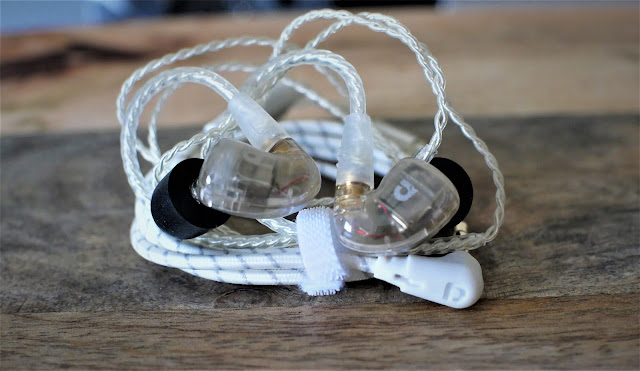 I did point out a lot of negatives in the main body of this review, but I did find that the Audiofly AF1120 MK2 wasn’t awful or terrible by any means. It’s actually rather enjoyable for a lot music, though falls apart on some styles – mainly acoustic rock music or songs that require a more even treble response.

The AF1120 MK2 has a sound that strikes warmth and body, while I still find it to have some issues related to treble coherency and sharpness, as well as channel matching. I also didn’t find the soundstage wide or deep enough for my liking, but I did find comfort to be wonderful and it felt like I wasn’t wearing them at times.